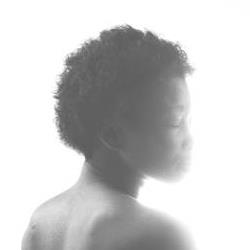 Trigger point aims to explore my reactions to different stimuli that push me to dance instantaneously. A notion that is both vast and simple. In this case, thanks to sonic triggers, I want to identify and create structures of improvisation in order to access all that inhabits me in terms of physicality and to observe the mental processes related to these manifestations. This project is the result of a collaboration of incredible artists in urban dance and in music such as Jaleesa TeaLeaf Coligny, Rahime NOSB Gay-Labbé, Mecdy Venom Jean-Pierre and Christina Hurricane Tina Paquette, Frédérique PAX Dumas as artistic advisor as well as Julien Senez-Gagnon and William Boyer-Desrochers in musical production.

BIO // Active in Montreal’s dance scene since 2013, Marie-Reine MQueen Kabasha combines her love of movement in all genres and the pleasure of sharing in all her practices. In freestyle as in theatre, each opportunity of expression nourishes her. She collaborates with many leading figures in urban dance in Montreal and internationally. Notably, in 2014 she joined the EBNFLOH dance company founded by Alexandra Spicey Lande and the Tentacle Tribe company in 2016. She also collaborated with the French waacking collective Ma Dame Paris in 2019. In parallel, she nourishes a growing interest for research and creation, presenting with Christina Paquette TNM in 2013 at the Festival de danses urbaines 100Lux et Orbite in 2018 as part of the OFFTA festival. She is currently undertaking a research project on her own language called Trigger Point.