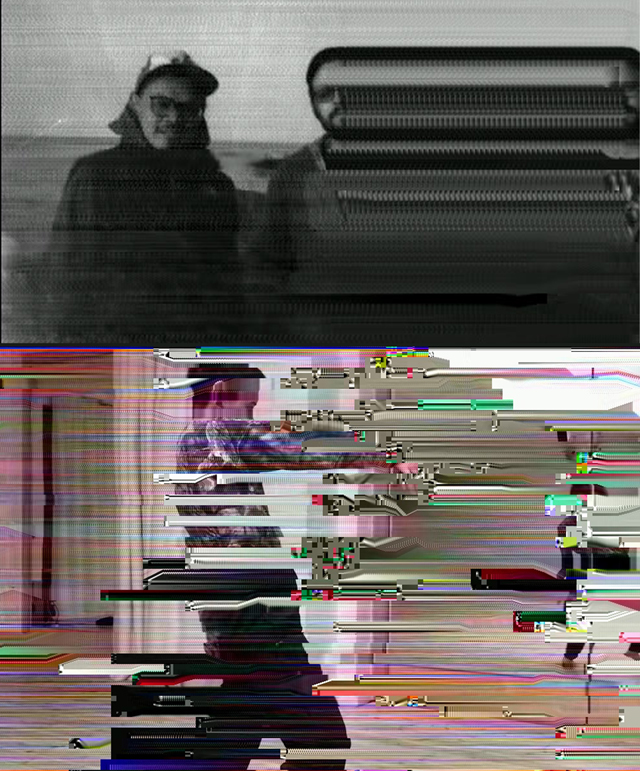 Pas d’apparat corps is a live videodance project presented in the form of analog glitch video projection and choreographic movement, with Calla Durose-Moya, Guillaume Vallée, Hazy Montagne Mystique, and Pulsatilla This multidisciplinary project seeks to demonstrate the psychic impact of trauma related to the facts and gestures of everyday life. Calla Durose-Moya, an emerging dance and video artist, will take on the choreography and dance from Toronto. She will continue research that she developed during her residency at Lake Studios (Berlin), a project concerned with the psychic impact of trauma related to the facts and gestures of day-to-day life. She is currently working on rebirth and emotional reconstruction through the body’s physicality through her queer, racialized and disabled perspective. This collaborative project’s procedural course aims to demonstrate the possible links between the unique practices and physicalities of analog video and the body. Through an analog audiovisual lens, the process questions the relationship between artist and spectator in the present context of dematerialization and new technologies.

BIO // Calla Durose-Moya is an emerging artist practicing in performance and hybrid media and currently living and working in Toronto, Ontario. In the exploration of the materiality of mediums of both the body and ‘obsolete’ media, she explores the (im)possibilities of her identity, and the understanding that being queer, racialized, disabled, and a woman systematically impacts the way she is seen or ‘read’. By predominantly using scripts in her work, she is interested in the interplay between text, language, gesture, and its foundations in personal vs. political dichotomies. Lately, Calla has been most interested in examining themes of improvisation and scripting that manifest in choreographic forms. Calla’s practice, past and present, is focused on a dialogue between processes of the materiality of the medium, and the corporeality of presence. Calla’s current work extends her media work’s exploration of improvisation and scripting by examining these phenomena as choreographic forms. calladurosemoya.com

Hazy Montagne Mystique is a sound artist that is devoted to composition, installation and performance. He is of Lao and Tai Dam origin and his culture’s influence plays a significant role in his research. His musical training has long been a self-taught practice and he is active in Montreal’s experimental music scene. He is constantly searching for new sound and for an active communication with his collaborators. He has presented his performance work across Canada, the U.S., Japan, France, Amsterdam, Italy and Austria. https://hazymontagnemystique.bandcamp.com

In Pulsatilla (Lisa Teichmann)’s musical compositions, organic sounds merge with soft, pink and yellow drones, combining electronic and classical instruments with field recordings. The emerging soundscapes make audible tensions between the opposing forces in nature: the comforting forest sounds juxtaposed to radio waves or the human heartbeat pervading tape loops. In her live performances she layers recorded sounds on top of atmospheric pads, flute and organ improvisation to achieve organic, deep and natural soundscapes. She organizes monthly jams with Montreal-based artists to provide an open, safe and diverse environment for free artistic expression and is a host of LoSignal on CKUT 90.3 FM.

Experimental filmmaker and video artist, Vallée graduated from Concordia University with a Major in Film Animation and MFA in Studio Arts – Film Production option. He’s interested in alternative forms of moving images in analogue forms as a way of considering the direct interaction between different mediums. His work is an exploration of materiality within the creative process. In attempts of creating a more complex relationship with his subject matter, Vallée makes use of cross-medium forms that range from camera-less techniques to optical effects, glitch, video feedback, resulting in expended & hybrid pieces. He works mainly on Super8, 16mm and VHS. His audiovisual performances have been shown in various festivals in Canada, USA, France, Italy and Japan and his experimental films and videos, distributed by Vidéographe and Winnipeg Film Group, have been screened internationally. Guillaume Vallée is currently an artist-in-residence at Main Film, part of the Film Factory program (2019-2020). https://www.gvallee.com/