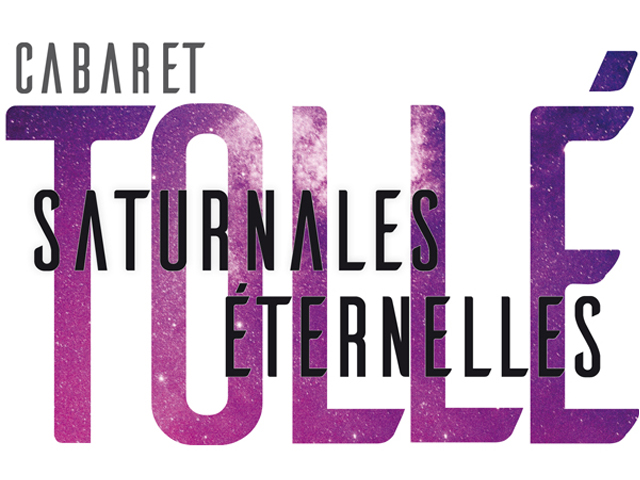 After several years of outspoken performance about politicians, austerity, poverty, and “the digital turn”, this season’s playful theme for Cabaret Tollé is “Eternal Saturnalia”. The Roman festival Saturnalia featured wild revelry, subversive role reversals and a temporary reprieve from the normative social order. It was also a conservative gesture wrapped in liberal excess, intended to maintain the status quo. The theme also refers to our 30th anniversary and 1st Saturn Return: an astrological period of significant growth, the end of the a big life cycle and the start of an other, inviting us to look backwards in order to learn and find inspiration for the future.

We are living in an era which demands radical, sustainable reversals. The billionaires must relinquish their wealth. The carbon must return to the ground. Constant growth must give way to thoughtful deceleration. Guided by Alexis O’Hara, let’s imagine an eternal Saturnalia: an ongoing, joyful celebration of big shifts and new social orders!

In these dark pre-apocalyptic times, Éliane Bonin, Gabrielle Garant and Solène Laurin-Laliberté (from Productions Carmagnole) will share with you their Apocalyptic Preliminaries designed to help you survive the imminent chaos and prepare yourself before climate catastrophes hit our privileged western homes. In the context of increasing islamophobia and general tension triggered by the non-acceptance of differences, Alida Esmail, a second-generation Shia Ismaili Muslim Canadian choreographer and performer, will reflect on the legal/political/social issues around Islamic garments such as the Hijab and Niqab. Hanako Hoshimi-Caines and Stephen John Quinlan will share PleasurED, a short form coy educational performance on being alive where learning is explored as a process of re-veal and intensifications of what is already known. Mykalle Bielinski, a singer, performer, music composer, and poetry and stage writer, will perform ODA PLASTIKA, a ritual where she will be one with plastic, mixing environmental activism and revolutionary satyr in a full-on dada spirit. In Bonsoir Saturne! Ciao Saturne! Krista Muir’s theremin will invite you to float amongst Saturn’s rings and moons before landing back on Earth for an electropop dance serenade! Last but not least, Cabaret Tollé is thrilled to welcome this year again a very special guest in these dark times: The Right Honourable “Justin Trudeau“, who, to our surprise, he will be taking questions town-hall style this year.

For those who show up early, a delicious local and vegan meal will be served from 7 p.m. in our office. Bring your own forks & containers!

The work of Alexis O’Hara embodies the transcendent potential of the accidental, the universal magic of humour and the opportunity trapped in the stuff that people throw away. She has co-created (with 2boys.tv) large-scale performance works with artists from marginalized communities (in Cuba, Mexico, Brazil and Nicaragua), travelled internationally with her spoken-noise performances and toured a very popular sound installation that offered a stage for spontaneous musical collaboration between strangers. She has released four albums, a book of poetry and enough helium-filled balloons to get her dress caught in a chandelier. Her work has been presented in diverse contexts in Slovenia, Serbia, Germany, Spain, The UK, Ireland, France, Belgium, and across Canada. In 2016, she was awarded the Powerhouse Prize by Canada’s longest-running feminist art gallery, La Centrale. Alexis and her drag king alter ego, Guizo La Nuit are mainstays of the Montreal cabaret scene.

Alida Esmail is choreographer and performer. She holds a Bachelor in Contemporary Dance from Concordia University and a Master in Rehabilitation Sciences from Université de Montréal exploring the intersection of Art and Health. Her education also includes a year in India from the Attakkalari Centre for the Movement Arts and Mixed Media and extensive practice in International Ballroom/Latin dance. She has competed nationally in Ballroom/Latin, winning in several categories and currently uses this training to help develop and spread Liquid Lead Dancing, a gender-neutral approach to partner dancing featured on TED.com. Recent self-choreographed performances include solos at the Festival du Monde Arabe, the Festival Orientalys and the Aga Khan Jubilee Arts Festivals in Toronto and Montreal. Alida has a keen interest for socio-political content and questioning topics related to diversity and inclusion. She continues to choreograph, to perform, and to collaborate with artists and scholars, encouraging intimate crossover.

Gabrielle Garant is a puppeteer, stilts acrobat, light designer, technician, maker and general magician. Solène Laurin-Laliberté is an actress, dancer, mover, circus artist, thinker and creator of chronic freedom. Éliane Bonin, aka Lili la Terreur, has dedicated herself to Carmagnole since 2000. Along with a rich and varied circus practice, she teaches, creates and programs events, invents spaces for free creation and self-administers a multi-indisciplined career in performance arts. These 3 multi-talented artists are pure performance powerhouses who co-author the texts and concepts for their acts and take malicious delight in clowning them. They wish you all a beautiful evening and a most delightful end of the world. Carmagnole is devoted to carnival and circus arts and seeks to remove itself, as much as possible, from the laws of the capitalist market economy. Carmagnole Productions are deeply invested in the goals of social transformation, inclusion and civic responsibility. Creating, yes, but also training people in the art and practice of living together, popular education, reflection, philosophy and engagement. Carmagnole has produced 9 outdoor carnivals in the countryside, numerous indoor cabarets in venues or community lofts, parties in parks, street performances, a fanfare as well as the Érotisseries, a multi-disciplinary circus creation on eroticism made up of 6 unique editions between 2005 and 2014. The next one is scheduled for February 2021 at l’Espace Libre. Since 2001, Productions Carmagnole function thanks to the hard, unpaid work of the humans invested in it, demonstrating that doing things differently still matters to some… carmagnole.net

Hanako Hoshimi-Caines is a dance and performance maker based in Montreal. She is committed to dance, performance making and philosophy as a way to see, feel and love better. And what she means by love is an ambiguous kind of knowledge that is necessarily embodied, transformative and involves time and intimacy with things. Hanako has collaborated/danced with many choreographers here and in Europe and her works have been shown in Montreal as well as Germany, Bulgaria and Sweden. Her last work Radio III, in collaboration with Elisa Harkins and Zoë Poluch, premiered at the MAI in June 2019.
Stephen John Quinlan is a Montréal based dancer, performer, and interdisciplinary artist. He holds a BMus in classical singing from Memorial University of Newfoundland. He is a forever student of ‘make your dance school’ at various institutions and dance floors in Montréal, where he has acquired a diverse background in various styles. Stephen has also performed internationally as a puppeteer, with Cabaret Décadanse (Edinburgh Fringe, Aarhus Festuge, as well as multiple seasons with La Soirée). A member of Asymmetry Creations, under the artistic direction of Axelle “Ebony” Munezero, he has performed in 100Lux 2019 with Forêt Noire (Axelle “Ebony” Munezero & Martine “Cherry” Bruneau), and received first place at Hot Mess 2019.

Krista Muir is a composer, performer, producer and multi-disciplinary artist whose music has taken her around the world since the early 2000’s. She has composed and released seven albums under her name or alter ego Lederhosen Lucil, co-written and toured with DJ Kid Koala, published an art book entitled The Joy of Hosen, performed regularly at festivals such as SXSW and Pop Montreal and written music for film, television and interactive media. The inaugural artist-in-residence at Fisch Haus (Wichita, KS) and FL!GHT Gallery (San Antonio, TX), Muir performed, facilitated songwriting workshops and curated multidisciplinary events – collaborating with local communities to create experiences fostering cultural exchange. In March 2019 Muir participated in the Singer Songwriter Program at Banff Centre for Arts and Creativity. She is currently working on two projects including a children’s album to be released in 2020.

Special guest « Justin Trudeau ». Some of you may remember that his attendance in 2015 made him the first Prime Minister in Canadian history to officially attend a radical political cabaret. Note that we at Studio 303 are not sure that his advisors fully read our explanation of our theme “Eternal Saturnalia”…