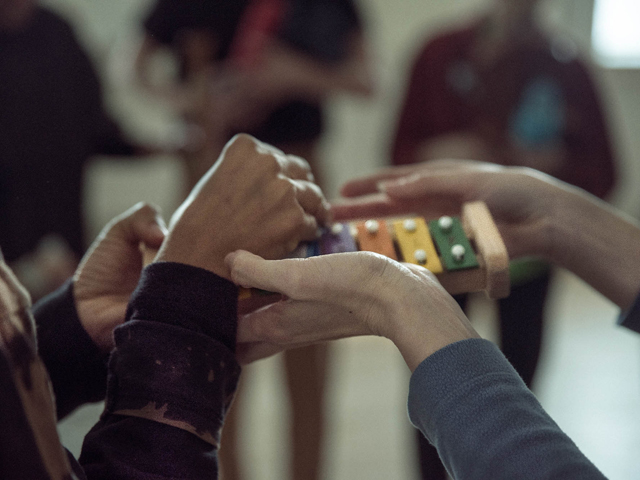 As part of the Curator-in-Residence program, Studio 303 invites Burcu Emeç and Christopher Willes to design a project whose form will be revealed during the season. The floor is theirs:

“What would it look like to build a practice of making our sources known? Working for the first time together, we (Burcu Emeç and Christopher Willes) propose a co-research process exploring notions of embodied citation, transmission, and distributed authorship within performance practice. Through our project at Studio 303 we will host a space to consider different conceptions of citation within performance making–– not only as an ethical concern, but as an ongoing and embodied practice with both aesthetic and political implications.

We’re asking: How do we care for the presence of other people’s work within our own? What new meanings and ways of living arise when sources are made explicit? What new conceptions of community, ensemble and relation emerge when working methodologies are focused on caring for how knowledge is transmitted from person to person? How do performance practices trouble notions of ownership? How do legal frameworks such as Canadian Intellectual Property Law address these issues and what are their limits? How do these imperatives change when working collectively, vs “in collaboration” or even “alone”? How do they change when considering the non-visual and intangible art forms within performance works (such as music or theory)? How does one honour the presence of those not physically present in our work?

Subjects we are currently exploring include: embodied forms of citation, performance as genealogical garden making, citing the non-visual and intangible on stage, current Canadian intellectual property law (as a limited framework), citation within workshops and artistic-research / pedagogical context.”

Burcu is practicing care, political action and rigorous curiosity. As a performance maker her approach blends social commentary, active listening, improvisation and visual art. Her work lives in the shifts between the highly poetic and unbearably banal, subverting codes of live performance and creating tensions between language and image.  Burcu’s collaborative and independent projects have been presented in a wide range of settings in Montreal, Toronto and Germany, including festivals OFFTA, SummerWorks and ZH, and venues such as Eastern Bloc, Never Apart and Montreal arts interculturels (MAI).  She is also a cultural worker, and a coordinator at the artist-run centre articule in Montreal.

Christopher is a multidisciplinary artist and dance dramaturge based in Toronto and Montreal. Moving between communities and frameworks of experimental music/sound, dance, and visual art forms, his work focuses on the subject of listening as an inherently interdisciplinary, embodied and situated practice. His current research interests include approaches to group processes and distributed authorship, as well as psychoacoustics and the corporeality of sound. He also works as part of a team that co-leads Public Recordings, a Toronto based organization focused on interdisciplinary performance research.