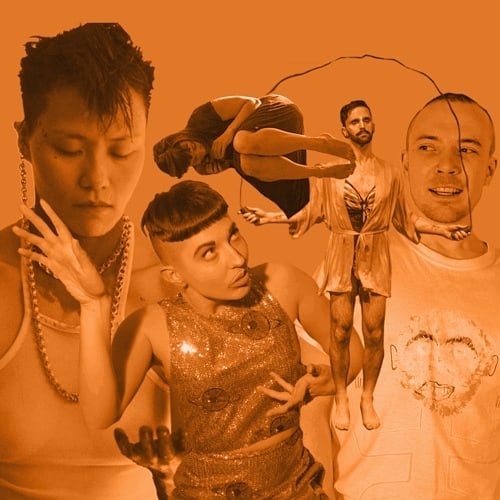 PROJECT // This is actively built is a research residency that carves out a space for queer dance artists from Calgary and Montreal to dialogue, collaborate and create, with a focus on queering collaborative creation structures through cross-polination. It was initiated and curated by Nate Yaffe, with gathers participating artists Niuboi, Kevin Jesuino, Winnie Ho and Melina Stinson. Following a week in Calgary in October at the Fluid Festival, the artists reunite in Montreal in February during Queer Performance Camp.

BIOS // KEVIN JESUINO is a performer, community organizer and activist. Performance creation credits include: Finding Pessoa (Swallow-a-Bicycle Theatre, Innerfish Theatre Co.), Party Tricks (to the Awe #1), Being Together (Mile Zero Dance), Mating Calls (Alternator Art Gallery). Other collaborative performance credits include: Cows (The Grand Theatre); What I Just Said Is True, Because I Said So (Swallow-a-Bicycle Theatre); Atlas (Casa Branca). Kevin also works in the realm of socially engaged art practices, collaborating with marginalized communities in developing sculptural, video and live performances that explore socio/political/environmental issues with a hopes of using arts as a vehicle for meaningful change.
Kevin is a queer Portuguese-Canadian. He is a graduate of Grant MacEwan’s Theatre Arts program and the University of British Columbia’s BFA Interdisciplinary Performance Creation Program. He is the former Artistic Director of New City Collective, former Artistic Associate of Swallow-a-Bicycle Theatre and former Community Arts Facilitator with Antyx Community Arts.

MELINA STINSON is a dance artist originally from Calgary, based in Montreal since 2006. After graduating from the École de Danse Contemporaine de Montréal in 2009, she has worked with various companies and choreographers in Montreal and Calgary and has performed across Canada, Europe, The Middle East and Mexico.
In search of autonomy, in 2011 Melina began what continues to be her personal dance practice. This practice includes everything from a “365 dance a day” project completed in 2013 to a creative healing practice developed around an injury in 2017. She also created several short solo and group works between 2010 and 2015, performed in Montreal, Calgary and Winnipeg. Between 2012 and 2019 she worked as a multidisciplinary artist for Theatre Junction where she created movement and choreography she performed in Calgary, Montreal and France.
Melina is currently interested in paying attention to movements that create other movements.

NATE YAFFE is an American experimental dance, theatre and video artist, based in Montreal who researches queer strategies to create relational choreographic structures, placing performance as fundamentally a social exchange. His tactile dances dismantle movement shame through un-correcting the self-censored body.
Nate initiated and curates the residency series, This is actively built, which brings together queer artists to attack the question ‘what is queer dance?’ challenging the classic residency structure by restituting the artists’ autonomy to allow a cross-pollination of knowledge and practices.
He is a member of the cooperative dance company Je suis Julio, which develops community- centred alternatives for being a dance artist in face of the uncertain future of global capitalism and ecological collapse.

NIUBOI came from space to save the world from a life of blasé mundanity. They live and work in Amiskwaciy (Edmonton) on Treaty 6 territory. They are a trans non-binary alien and use they/them pronouns. Their work combines visual art, movement, and theatrical practice to create live performance, video, installation, and cabaret works that explore queerness, futurism, and joy. Their self-created works Glass Washrooms (theatre), The Milk Bar (film), Antiquation (installation), and NIUBOI x Earth (politi-pop) have been presented by Fluid Fest, Found Festival, The Chinook Series, Mile Zero Dance, Odd Wednesday, and Nextfest. niuboi.com

WINNIE HO (Superhova) is a dance performance artist who currently resides in Montreal. She grew up in Calgary after immigrating to Canada from Hong Kong at the age of eight and received a Bachelors of Kinesiology at the University of Calgary. She was recently the recipient of the 2017 DanceWeb Scholarship Program at Impulstanz Festival in Vienna. She has worked with Shake It Collaborations in Sweden, professor Chih-Chien Wang of Concordia University and for choreographer Clara Furey in Cosmic Love in Montreal.  For the past five years, she has continued to expand and develop her research in the embodiment with organic/inorganic materials and of active spectatorship in collective sensing, listening, moving and co-creating together. Her recent work Seeds cast afar from our roots was a collaboration with Angie Cheng and Chi Long which premiered at the MAI (Montréal, arts interculturels) in May, 2019. Furthermore, her works have been presented in Ponderosa Festival in Berlin, Spring Board Summer Series in Calgary, MIX Festival in New York City, Le Petite Festival in Paris and Out There Festival in Porto, Portugal. winniesuperhova.wordpress.com/

This CanDance Creative Exchange residency is a co-presentation of the The CanDance Network, Springboard Performance’s Fluid Festival and Studio 303. It is supported by the Canada Council for the Arts, Canadian Heritage, Tangente and Je Suis Julio.