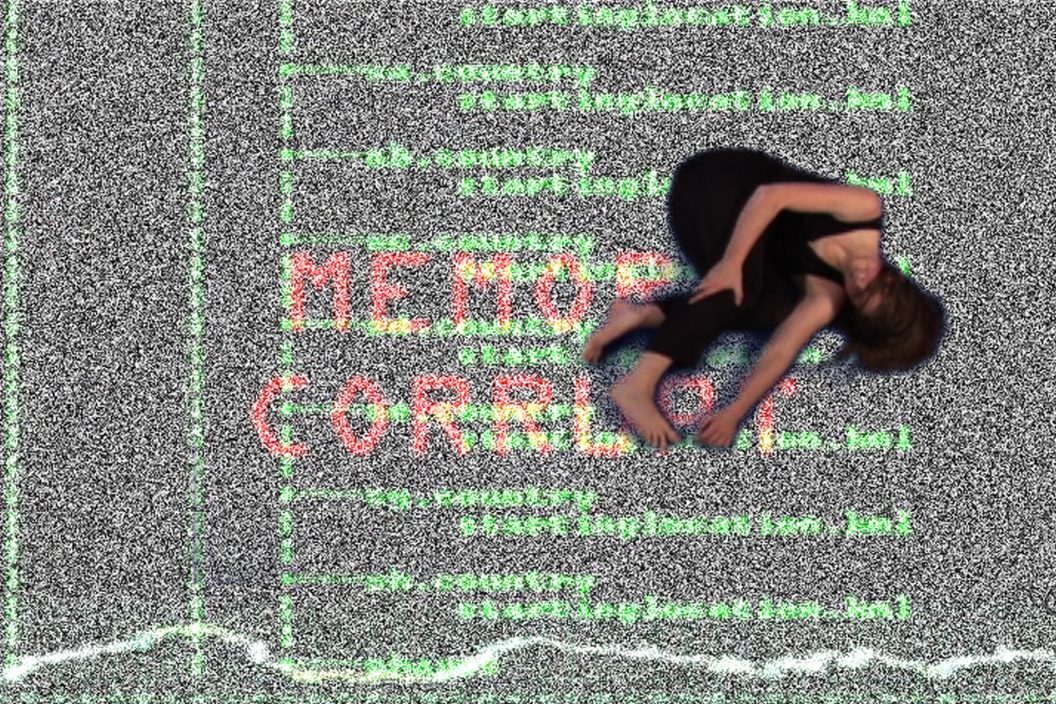 Studio 303 invites you to their evening screening All Nuit Long Vidéodanse, as part of Nuit blanche à Montréal 2019. The years theme is : rupture! Program on loop all night long with popcorn, beers and samosas for sale!

***
Alisha Billias – The Exact Color of Silence
Constantly pushing the boundaries of our physical container, our soul moves forward and the body follows.
My name is Alisha Billias and my work is inspired by dance, circus, music and new media. I am interested in artistic practices that can evoke focus, creating a temporal shift within the performer and viewer.

Caleb Foss – Screen
This project concerns the ‘data double’ an individual accumulates from years of recorded internet activity. Screen imagines a fantastical agency over one’s data double, allowing one’s digital body to become amorphous and illegible to an algorithmic spectator. The dancer’s actions, extrapolated from smartphone user gestures, open ruptures in digital body representation and surveillance.
Caleb Foss combines a spectrum of old and new media devices with a focus on how their mechanics reflect and impact social and political structures.

Clare Schweitzer – Enter Face
This film is the product of research into the histories and constructions of the body as it goes further into an age where people willingly submit their lives to a network of screens. It aims to explore new conceptions of lived reality and altered means of communication that result.
Clare is a practitioner and researcher of Screendance who is interested in exploring universal predicaments through intimate, humorous frames.Her films have been screened internationally at festivals such as the Perth Screendance Awards, Muestra Movimiento Audiovisual in Guadalajara, and dança em foco and she has presented research at the Light Moves Symposium of Screendance.She works as a Production Associate with Dance Film SF and as a videographer for Rapt Productions.

Claudie Lévesque – Encore Pina
Encore Pina (Still Pina) pays homage to German dancer and choreographer Pina Bausch and introduces us to Yeelan Dumas, a keen advocate of sign language.
Claudie Lévesque obtained her B.A. in Film Production from Concordia University in 1991. For more than ten years, she has worked in film and video as an artist and cultural worker at artist run centers – Les Films de l’Autre and Main Film. Her works have been presented in several festivals and special events.

Elian Mikkola – Waves
Waves is a collaborative film exploring the ever-changing identities and how we evolve our sense of self through movement, visuals and sound. The film depicts a dialog between three queer or/and women artists who work in dance, music and film across the globe.
Elian Mikkola is currently a Montréal based filmmaker and media artist. Mikkola is originally from Turku, Finland. They completed their MFA in Media Production in 2019 from the University of Regina. Elian’s work explores themes such as memory and spatial belonging through queer perspectives.

Giorgos Efthimiou – It
It is what it is. It doesn’t know how to be something else. Neither wishes it.
Giorgos Efthimiou was born on 23.02.1988 in Athens, Greece. He used to watch films, now he watches films and he is a film director/visual artist, performer, curator and writer. Also, he likes to cook for the others.

Michael Lyons – Nonoko/Kaos No Ma
Nonoko Sato is filmed at the Kaos No Ma (Room/Space of Chaos), an independent project of artist/collector Sunamoto Matuo, who creates uncanny assemblages from the cultural debris of pre-war Japan. The performance was filmed in room lighting on decades-old Kodachrome Super 8 and developed using instant coffee. The low sensitivity of the film required an extended and variable exposure for each frame, creating an uneven and distorted representation of time and movement.
Michael Lyons (Scotland/Canada) is a researcher and artist based in Kyoto, Japan. He is Professor of Image Arts and Science at Ritsumeikan University.

Nina Vroemen – CRUSH
C R U S H is a dance video created by Nina Vroemen and danced by Carly Woolner. The choreography is inspired by the double-or triple-entendre of the word “crush” culminating in the inevitable eruption of when something so sweet becomes utterly intoxicating.
Nina Vroemen seeks projects that quicken the heart. Working primarily with video, dance, and sonic experimentation, she aims to engage audiences in realizing multi-perspective narratives, unmarked history and the silhouettes of memory. Her interests and research include queer identities, digital humanities, alternative education, storytelling, human rights, and environmental issues.

Olivia Khoury – Babel
Babel is a sensorial experience about fabrics lines and textures in contrast with metal. We don’t really know whether they are woman of the future or the present. It’s a game of illusions and images.
Olivia Khoury is a pluridisciplinary artist passionate with music, movement and performance. Her project Babel explores mediums: architecture, aesthetic and space by investigating their effects on the dancing body.

Priscilla Guy / Mandoline Hybride – Hiatus
The micro-movements of about 20 person’s faces are revealed by the compressed time of the video image. Two women stand out and act in a jerky interval. Through speed and slowness, glitches are made visible in a meditation both intimate and public.
In 2012, Priscilla Guy co-founded Regards Hybrides, a project dedicated to articulating discourses and dance practices on screen. Through its web platform, Regards Hybrides gathers online resources and work tools (list of festivals, specialized publications, links to key organizations) that promote the development of these hybrid practices. A mentoring program for artists and presenters launched in 2014 aims to support the milieu in its efforts for developing hybrid works in dance and cinema. In November 2017, Mandoline Hybride launch the first edition of the Regards Hybrides: An International Forum.