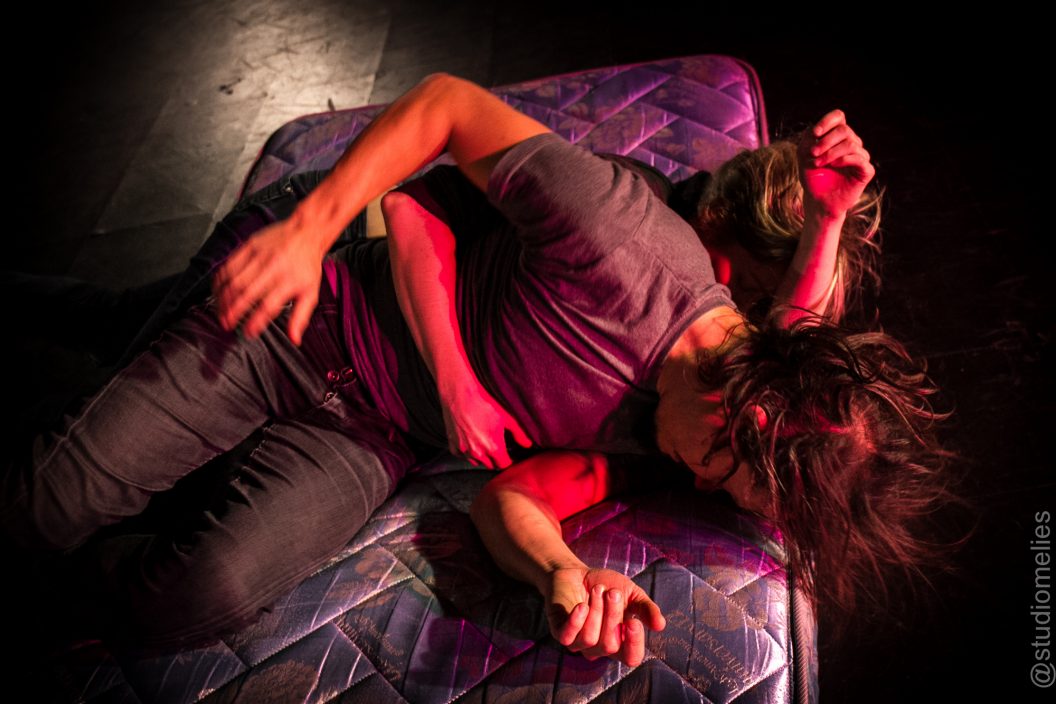 Fuck it! – Catherine Lafleur by Studiomelies

REMIX // Troubling the idea of ownership through a radical sharing of material.

Montreal-based choreographers Sarah Manya and Catherine Lafleur will see their works remixed by Daina Ashbee and Caroline Laurin-Beaucage, respectively, over the course of a one week residency, offered in partnership with Compagnie Flak. Audiences are invited to witness the results during two public performances featuring two originals and two remixes, followed by a discussion with the artists.

For this fifth edition, Studio 303 continues to explore dance reinterpretation, remixing and covering.

”Belle is confident. She tells you what is on her mind. She wants your attention. She wants to be a rockstar. Or at least a Courtney-Liza-Or Holly. She is practicing very hard.”

With intensity and casualness, the dance inspired by grunge translates into movement the desire for action, revolt and affirmation. It manifests itself as much by its ardor as by its apathy. The bodies evolve into a letting go where everything is possible and allowed.

Daina Ashbee is known for her radical works at the edge of dance and performance, and their complex subjects and taboos including female sexuality, Métis identity, and climate change. Recognized as one of the most promising choreographers of her generation, her choreographies and her work is regularly presented in prestigious festivals such as The Venice Biennale, Les Rencontre Chorégraphiques de Seine Saint Denis, and the Munich Dance Biennale. Daina is artist-in-residence at Agora de la danse until 2020 and the associate artist of CCOV.

Caroline Laurin-Beaucage is fascinated by the human body, which she places at the centre of her choreographic research. She questions the biomechanical and neurological mechanisms that govern us and seeks to reveal details that appear invisible—the blind spots that inhabit us. Through live performance and installation, she attempts to reveal the thin transparent thread that connects us to life and to our fellow beings.

Catherine Lafleur is an independent performer and choreographer. She graduated from UQAM in 2005. Since 2009, she has presented her work at Studio 303, the MainLine Theater as well as several indoor and outdoor venues as part of the Festival Quartiers Danses. Sponsored by Mandoline Hybride, her work was recently broadcast in the Accès Culture network. She continue to working on a new piece initiated in September 2017.

Sarah Manya is performance maker, choreographer and director. She makes site-specific works and dance theatre performances as well as multi-media productions. Her work has been performed throughout Europe in festivals such as Springdance, Festival Something Raw, Motel Mozaique, Festival Tweetakt, and Noorderzon, Body Stroke, Recyclart (BE) Festival Neuer Tanz (DE). She has been a guest artist and lecturer at New York University and Amsterdam School of the Arts Modern Theater Dance Department among others. As a performer, she has worked with Felix Ruckert, Martin Butler, Vera Mantero and Vloeistof. Her training includes DasArts (NL) and Rotterdamse Dansacademie (NL). She is the recipient of a Fulbright/Netherland-America Foundation Fellowship in Choreography.