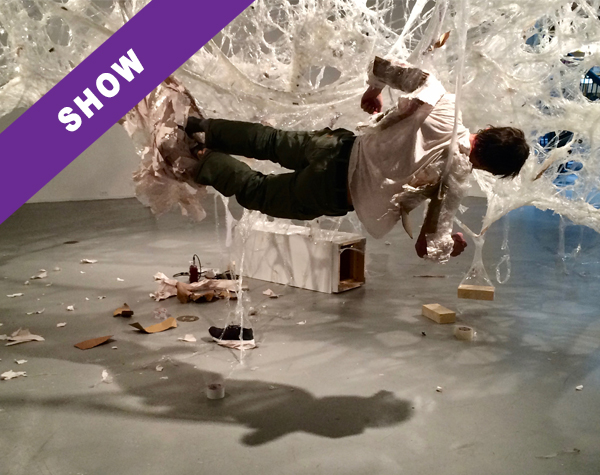 Our annual REMIX event troubles the idea of ownership through a radical sharing of material: we invited choreographers to remix works by other artists over the course of a one-week residency.

For our 30th anniversary, we explored our archives to find artists who marked Studio 303’s history by producing works intriguingly “impossible” to remount, let alone remix: Action Movie was the last creation by the dynamic and now defunct WIVES, whereas Peter Trosztmer’s #boxtape took “site specific” to an extreme level. Eduardo Ruiz Vergara will remix Peter Trosztmer’s piece while the group formed by Burcu Emeç, Michael Martini, Nien Tzu Weng and Roxa Hy will remix the one by WIVES.
Audiences are invited to witness the results during a double bill of the remixes followed by a discussion with the creators of the original works and the remixers.

Action Movie (2017) is a piece by WIVES, that attempts a live, anti-oppressive action movie on stage, examining the genre’s mass appeal from a feminist perspective.

#boxtape (2015) uses a shit load of clear packing tape and through a shared sense of labour, hospitality, and dance, invites the public to join as we build and dance in a sculpture with tape that binds together the social fabric of the performance environment.

Burcu Emeç, Michael Martini, Nien Tzu Weng and Roxa Hy come from different disciplinary backgrounds in theatre, dance, and new media arts. Their non-hierarchical and interdisciplinary structure incorporates their respective practices in a discussion-based process. Perhaps ephemeral, the collective shares a mutual desire in exploring artistic, political and economic concerns through performance, always with a flare of humour and self-commentary. Shifting between the banal and the poetic, their ongoing project “Ça a l’air synthétique bonjour hi” (OFFTA 2018, ZH 2018, Summerworks 2019) suggests a collective reflection on invisible labour and participation.

Originally from Colombia, Eduardo Ruiz Vergara has been active in his country in the development of contemporary dance as a teacher, researcher, choreographer and co-director of Estantres Danza of Bogota. He has signed more than fifteen artistic creations since 2001, his perfomance work leading him to explore the cross-relationships between sound, image, poetry and movement. Recipient of numerous scholarships and recognitions in Colombia, the choreographer-researcher moved to Montreal in 2012 where he developed a reflection on the poetic body and the world of sensitivity in the context of the doctorate in arts studies and practices at UQAM. At the same time, he pursues his creative work in Québec, namely in partnership with the MAI (Montréal, arts interculturels), the studio 303 Dance-cité and La Chapelle Scènes Contemporaines. Eduardo Ruiz Vergara’s pieces have been presented in Latin America, Europe and Canada.

Peter Trosztmer studied dance at the Concordia University Department of Contemporary Dance and the School of the Toronto Dance Theatre and has a Bachelor in Classical studies.  Returning to Montreal in 2000 to work with Marie Chouinard, he has gone on to distinguished himself as an interpreter and has worked and continues to collaborate with many national and international choreographers and directors. He is presently focused on an Augmented Reality work for the Wilder Building in Montreal.
Jeremy Gordaneer attended the Camosun College Fine Arts program in Victoria and has travelled extensively throughout Europe, Africa and America in order to study art and hone his craft. He spent a decade in Victoria as a member of the Chapman Group, a loose collective of artists and writers, and studied Theatre at U-Vic” He continues to design for theatre and dance, while also maintaining his visual art practice. More recently he has launched into large-scale immersive performance projects such as #boxtape. He is presently attending the University of Alberta to obtain his master’s degree in scenic design.
Thea Patterson is a choreographer, performer and dramaturg. Her research investigates the potential of the dancing body as the site of theoretical discourse in and of itself. Her early choreographic works include Rhyming Couplets (08), and A Soft Place to Fall (06) which was made into a BravoFact film. From 2007 to 2015 was dramaturg, and co-artistic director with Peter Trosztmer, on seven acclaimed works, including Eesti: Myths and Machines (2011). An interest in collaborative models then lead to the co- founding of the collective The Choreographers (2007-2011). She began work on her Masters project between the is and the could be (2016) which explored emergent choreographic forms, and other methods for altering aspects of spectatorship. She has several current projects, as a dramaturg, and collaborator, and choreographer in Montreal, Portugal, Edmonton, and Newfoundland. As well, she is pursuing her PhD in Performance Studies at the University of Alberta.

WIVES was a feminist performance collective from 2009 to 2017. Based in Montreal and Toronto, WIVES was made up at different times of Julia Thomas, Emma-Kate Guimond, Aisha Sasha John and Leah Fay Goldstein. During this time WIVES produced, among others Sea Foam Blue, Feeled and Action Movie. In 2016-17, Studio 303 hosted WIVES as artists in residence (including an exchange with Vermont Performance Lab) as our first Curators-in-residence (for 2 editions of Assemblée), and as part of the Edgy-New York programme at the Performance Mix festival at Abrons Art Center. During WIVES time at Studio 303 they shared their creative and working processes as well as inspiration for relevant subject matters.
Emma-Kate Guimond is an Edmonton-born, Montreal-based artist. Moving between performance, video, and drawing, her work examines different modes of performativity, ranging from unaware, to banal, to technical, to expressionistic, to dramatic. She has been presented by Visualeyez Festival (Edmonton, 2013), Mountain Standard Time (Calgary, 2014, 2018), FADO (Toronto, 2014), Performancy Forum (Brooklyn, 2015) as well as the RIPA (Montreal, 2016). From 2009-17 she worked with WIVES and from 2017-18 she collaborated with Katya Montaignac, Nadège Grebmeier Forget, Véronique Hudon and Hanako Hoshimi-Caines to present Attabler at the Agora de la Danse.
Aisha Sasha John’s medium is energy and her political strategy is vessel hood: she articulates a listening practice across the fields of dance and poetry. Aisha is interested in choreographing performances that are the occasion for real and multitudinous actions of love—in developing Sasha John technique. Sasha John is 2019-22  Dancemakers’ Artist-in-Residence for which she will remount her solo the aisha of is in 2020. She is also the author of the 2018 Griffin Poetry Prize nominated collection, I have to live. (McClelland & Stewart 2017) as well as THOU (Book*hug 2014), a finalist for the Trillum and Relit Poetry Awards.
Julia Thomas is an artist and performer based in Montreal.  Julia was co-creator of WIVES collective. WIVES presented Feeled (OFFTA, 2016) and Action Movie (La Chapelle, 2017). In 2016-17 WIVES curated Assemblée at Studio 303.

Studio 303’s accessibility – Consult this page for detailed information on our child care services and physical and financial accessibility.