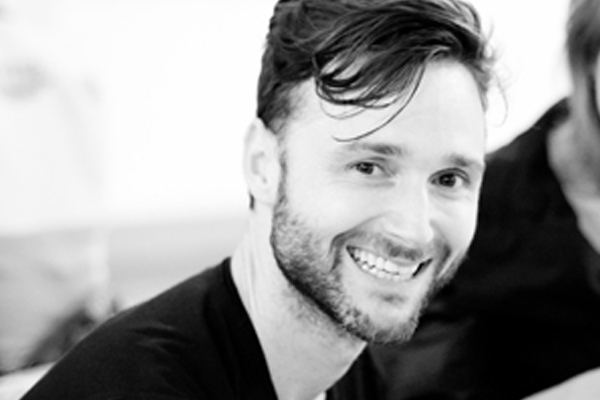 Contemporary choreographer/dancer/artistic director, Georges Stamos left his home province of Nova Scotia as a teenager to pursue professional training and a nomadic lifestyle outside of Canada for 10 years until settling in Montreal where he has maintained a home base since 1997. His choreographic work has been presented by L’Agora de la danse, The Baryshnikov Center For The Arts, PS 122, The Joyce Soho, Studio 303, Live Art Productions, The Canada Dance Festival, The Fluid Festival, Tangente, The LSPU Hall, Dancemakers Center For Creation, Dancing on the Edge Festival, Vancouver International Dance Festival, Harbourfront Centre, Amsterdam’s International Ness Festival and numerous other arts organizations. www.georgestamos.org

I met Mr. Makishi at CINARS about six months before the residency happened. We were both in the audience of another artist’s presentation and started to talk casually afterwards. It wasn’t until towards the end of the 45-minute conversation that he mentioned he worked at BAC. I gave him a DVD of my work that I had in my bag in case I met anyone and kept up contact with him by email after that. I did not have any expectations and did not push any proposals on him until he emailed me and asked for a proposal. Baryshnikov liked my work on the DVD and my proposal was clear so I was invited to do a creative residency as a way to get to know each other better. The residency went very well so after the residency, BAC presented my work in their following season.
They were really great to work with throughout. I was given a good fee for being at the residency, a truly amazing studio to work in daily, had a travel grant from CALQ and the BAC staff was calm and supportive at all times. It was great! During the residency Makishi came into the studio regularly to see a run of the work in progress and offer feedback. His feedback was intelligent and helpful. Baryshnikov saw a showing at the end of the residency and gave suggestions on aspects of the work I could consider more. His feedback was really sophisticated, specific and helpful. To be able to rehearse and perform in front of Baryshnikov in such an intimate setting in BAC’s magnificent studio in Manhattan with a close up view of the Chrysler and Empire State buildings was amazing. Baryshnikov toasted me with wine after the showing and the experience was kind of euphoric.
BAC programs contemporary dance, video works and “performance” with a strong movement element.

2) Brian Webb Dance Company
What: Production residency to prepare for a Canadian tour of two group works that I created
Who: Brian Webb, Director
Where: Edmonton, Alberta, Canada
When: One week in 2006

At the time we started to discuss this residency I had an ongoing professional relationship with Brian Webb of about 10 years. He had always been supportive in our conversations as my career developed. His company was not originally supposed to host this production residency, but because the presenter that had signed on to host the residency broke contract and pulled out of the project a month before the tour would have begun, Brian Webb stepped in, ensuring the piece was well prepared for the performances. The presentation in Edmonton that directly followed this residency was part of the company’s regular season and the booking was part of the CanDance Network’s Creation Fund.

With help from Brian Webb, Diagramme and the Canada Council, the tour ended up being a success. Staying calm, following Webb’s advice and working quickly with him to find solutions saved this tour. The tour helped solidify my national profile and increased interest in my work across Canada. After Edmonton we performed in Halifax, Calgary, Ottawa, and Vancouver. In Edmonton Brian Webb was an amazing host, we were treated to several elaborate meals, stayed in a great hotel, had lots of time to prepare in a large fully equipped theatre and the communications with his company were easy. The experience in the theatre was pleasant and the local tech team was also great. The fee was generous and the moral support was immense.
During this experience Web was hugely helpful in terms of familiarizing me with the politics and practice of negotiating details around touring. The major learning curve was to realize that touring has much less to do with the work and more to do with maintaining personal friendships and keeping administrators calm. They are often overworked and can become very sensitive. Be careful in all your communications and keep it friendly. If the personal relationship is solid with the presenter it will help when challenges arise.
The Brian Web Dance Company programs Canadian Contemporary Dance that is usually well into the “emerging” or “established” category.

3) TWOBYFOUR Festival
What: Performance at a festival
Who: Dancemakers (Michael Trent, Artistic Director)
Where: Toronto, Ontario, Canada
When: One week in January 2012

This was the second time my work was presented by Dancemakers. The conversation about this presentation started about nine months before the presentation date. Before the first presentation of my work at Dancemakers, three years earlier, I had stayed in contact with Michael Trent for about five years, with no real expectation of anything happening but always letting him know what was going on with my artistic activities and staying familiar with what was happening with Dancemakers. He eventually booked a group piece I had choreographed and then after three years we began to talk about this presentation of a duo in the TWOBYFOUR festival.
During our stay in Toronto and beforehand there was a great level of moral support and the organization was really easy to deal with. Trent was very understanding of the artistic complications I was going through and in our conversation he allowed me to evolve the piece into a new direction that was quite different from what was originally proposed to him. Often this is not an easy shift to make with a presenter, but because Dancemakers has an interest in process and research Trent was supportive of my new direction for the duo. This was very freeing for me artistically and helped me come out of a period of a mini artistic crisis. Overall communications were smooth and not overly complicated. The fee was great and we had enough time in the space to prepare for the show. The entire Dancemakers team was a really great team to work with. I also worked closely with then Producing Director Jeanne Holmes on communications for the show. Now Artistic Director of The Canada Dance Festival, Holmes eventually booked the piece for the Ottawa festival.
Dancemakers is primarily a company of dancers under the direction of artistic director/choreographer Michael Trent but it also presents contemporary dance that has an “explorative” aspect. They are interested in work with a “performance” element and have a focus on research. They have a festival of duets every two years.

4) Festival Danse Canada
What: Performance at a festival
Who: Jeanne Holmes, Artistic Director
Where: Ottawa, Ontario, Canada
When: Three days in June 2012

I met Jeanne Holmes and started the conversation about possibly being presented at CDF six months before the presentation happened. She saw the piece when it was presented at Dancemakers in January 2012 and I negotiated the contract and other details concerning the Dancemakers gig with her, so we really got to know each other that way.
Jeanne was very honest and clear about the challenges she was facing as the new artistic director of CDF. We kept the conversation open for several months and then it eventually worked out that she was able to invite me. While in Ottawa the CDF team was easy to deal with and I felt good about being part of this new energy that Jeanne was bringing to the festival. I wish I could have stayed longer, but I had to return to Montreal for rehearsals for another project. The technical team at the theatre was particularly great to deal with (the duo is a bit tech-heavy) and I completely appreciated this (in the three previous times I was at CDF the technical team had been problematic). Having a supportive tech team is essential to having a good experience in a theatre. It remains to be seen if the presentations at CDF will lead to other bookings, but many presenters from across Canada saw the work, the piece was well received and I am now in conversation with three presenters who were at CDF about possible presentations of the duo in 2013. It can take some time and several conversations to secure bookings for a work, even when there is genuine interest.
CDF presents dance from across Canada. Regional representation is essential for the festival so the programming varies as greatly as the work that is being made across the nation does. Jeanne Holmes is the new artistic director and I feel like she is bringing an exciting new energy to the festival.

In 2011 when I saw that Nyata Nyata was looking for a male dancer I had never studied African dance but was looking to learn something new and wanted to look outside of what the current European dominated trends in contemporary dance are. I was also interested in Zab Maboungou as an artist, so I auditioned to be a dancer in Montreal by Night. Maboungou hired me and this led to me taking classes at Nyata Ntata’s school and rigorous rehearsing and performing in Montreal by Night throughout the 11/12 season. The technique taught at Nyata Nyata has brought a new strength and sophistication to my dancing that I really appreciate. I can also feel the influence this has had on my dancing in other contexts. Previous injuries that were lingering in my 43-year old body from dancing over the years have been completely healed by the new technique I learned at Nyata Nyata.
This tour to Cameroon was confirmed about a month before we left. My experience in Cameroon at the Abok I Ngoma festival was profound. Besides being paid the standard professional dancer rate and having reasonable accommodations, etc., the exposure to the African culture that I received was priceless. I found the contemporary dance featured at the festival from Africa really inspiring and refreshing to watch. The traditional dancing and drumming I saw every night at the outside stage at the festival’s meeting place was simply amazing, and witnessing the way Africans live in their body in their daily activities was a real education. There are centuries of knowledge in the common everyday postures and movements you see in Cameroon. It’s a very inspiring place, especially for a choreographer or a dancer. Even though my role in this project was as a dancer, I have included the experience in this list because it also speaks to having a wider view when thinking about touring and when thinking about professional opportunities that are diverse. Learning vital techniques, expanding your world-view and meeting interesting artists from other cultures all have real value.