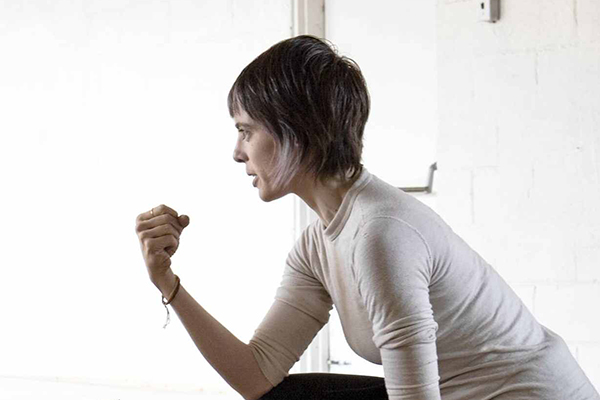 Artistic Director of her interdisciplinary performance company, hum dansoundart, Susanna Hood has worked as a dance artist and musician since 1991, and has been presenting her own work since 1997. Since 2005, Susanna has been focussing on the creation of works for small groups and some commissioned solos. Susanna’s works take, as their base vocabulary, the immersive and co-dependent integration of movement, sound, text, theatre, and other media in the search for clear and provocative means through which to communicate and express vital (if elusively ineffable) human experiences. humdansoundart.ca

TOURING EXPERIENCE (IN A NUTSHELL)

This is one of those circumstances that came out of planting many seeds, in various ways, over a long time. A friend of Brenda Leadley saw She’s gone away in Toronto in 2006, and recommended that Brenda look at the video. She contacted me. I sent her the video and followed up. I then went out to do a pitch of the piece at the PuSh festival in 2009. Brenda saw the pitch and while in Vancouver I also had meetings with various other presenters, including Mirna Zagar, regarding my work in general. Brenda and I kept in touch and saw each other several times at various showcase events. Though her theatre was not the appropriate venue, she was determined to find partners to bring the work to Vancouver. She initially partnered with Mirna to bring the work to the Dance Centre in September 2010, but I got injured and we had to cancel. She didn’t give up and eventually got Donna Spencer to partner with her and Mirna to bring the piece to Dancing on the Edge in July 2012. Brenda really championed my work because of its embodied theatrical and experimental nature, which, strangely enough was not at all the programming mandate of the theatre she was running. She has since left that position and is running the Magnetic North Theatre Festival. Financially, I was given a performance fee, travel, per diem and accommodation for three people. I was given a huge amount of moral support, especially through the fall injury and then an injury I suffered in the July performance. I’m not sure I can yet say what doors this has since opened. What stands out, are the doors that were opened along the way in order to make it happen.
It’s also maybe worth noting that Donna knew my work already because I had applied by application to Dancing on the Edge for their 2004 festival and got in. The festival is notorious for giving VERY late notice regarding every aspect of the presentation – including whether or not you’ve been accepted.

In 2007, having recently seen She’s gone away at Tangente and speaking with me after, Jack Udashkin, in first taking over La Chapelle, called me to see “what I had for him.” This was the first time that someone wanted to book something of mine that didn’t yet exist. I told him that I had something in progress that wouldn’t be ready to present till 2010. In the meantime he presented She’s gone away in 2008, and partnered with Studio 303 to give me both residency and production support for Shudder. I had a long-standing relationship with Studio 303, stemming from an initial application to the Edgy Women series in 2003 and building from there. I received a combination of support from both organizations including: residency space, tech, and travel support; performance fees, accommodation, travel and per diem (for 6 people), and full presentation support. I also received a great deal of administrative, networking, and moral support all around. Both organizations are extremely supportive of experimental work. Jack’s vision for La Chapelle is particularly interdisciplinary, with an emphasis on works that tend towards very strong statements and even shock, and often by younger artists. I have continued a strong relationship with both organizations. I have been invited to be one of 16 Associate Artists at La Chapelle.

This bi-annual tour is organized and produced by a fluctuating network of international presenters of which Tangente is one. Each presenter proposes an artist from their country and the agreed upon artists, then tour a mixed program of short works to each of the network’s venues. Though I was still living in Toronto at the time, Dena Davida, having presented my work once, proposed me as the Canadian choreographer. The programming seems to be dependent on a couple of different criteria – the interests of the sponsoring presenter and the interests of the rest of the network (which keeps changing). All the choreographers chosen were considered “emerging” to a certain extent and seemed to have very distinct signatures of work. Our travel, accommodation, and per diems for my musical collaborator (who was sharing the stage with me) and I were completely covered, and we received some kind of fee (can’t remember how much – reasonable, but not a ton). We had to pay some additional baggage costs for gear. We had a production/stage manager who travelled with us, and each presenter hosted us with receptions. This opportunity intended to give support in networking. Unfortunately, I can’t say that this really happened, and so if, as an individual artist, you made the effort to connect with people while on the road, it was under your own initiative. I can’t say that the experience really led to any more presenting or residency opportunities, even though I tried to make connections, but it was an incredible bonding experience with the other artists. This was especially so because in Berlin, we did not perform (which initially felt like a drag – and might have potentially been the most advantageous networking opportunity) but instead we participated in a collaborative creation workshop for which we returned to Berlin during Tanz im August to complete. This was a fantastic opportunity to see lots of things at the festival as well as to meet with and create amongst other artists, some being Berlin-based.