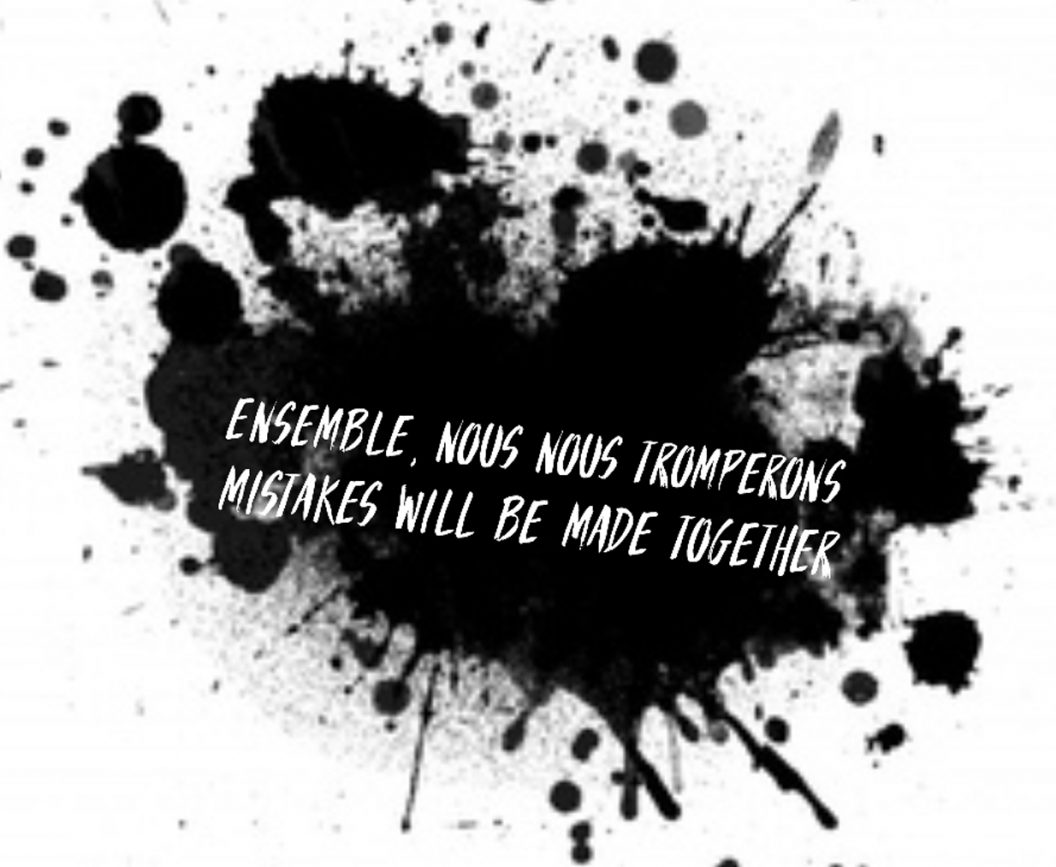 $10 to $20 sliding scale (cash, at the door) – Nobody turned away for lack of funds – Child care available – Facebook Event

Come to Studio 303 for a late afternoon of atypical and curious performances and activities curated by Angie Cheng, Studio 303’s 2018-19 curator-in-residence*!

Honouring the tireless work of shifting, questioning and moving our society and communities forward towards change, and acknowledging the following inevitability of mistakes being made in the process, Angie Cheng wonders: how do we change our relationship to our fear of mistakes and failure? Can we create a space where we allow for questioning, reflecting and discovering together? How can we move forwards rather than allow fear to be a force against change?

To answer, or rather try out possible answers, with the risk of making mistakes, this event invites you to explore and reconsider how audience, artists and work do, can or could relate to each other. Points of entry are multiplied in order to open time and space, while also revisiting the frontier/relationship between the artistic work and the audience.

From kinaesthetic choreography, on-the-spot participatory collaborative folk dance to a four-on-one performative meeting, the selected works will be exploring, for and with you, questions of togetherness, risk and failure, embodiment and feelings in the digital age. You will have the opportunity to experience some performances directly through touch, movement, listening, reading and speaking or more empathically by being a witness.

Join us for the whole afternoon, or simply pass through and/or come back. Some performances will be repeated a few times, others not, and a tea lounge/reading area will be accessible the whole time! Kids are welcome, but there will be childcare offered in the nearby office if they become too rowdy or if the small ones or guardians seek a break! For more info, contact Studio 303 at info@studio303.ca

Angie Cheng (curator-in-residence): Angie Cheng is a Montreal-based dance artist. Collaborative creation processes ground her ongoing research in performance; investigating the liminal space between creative process and performance event and between spectator and performer. The embodied and specific understandings that arise from these investigations shape her current questions and engagements both in her own work and with others.

Burcu Emeç: Burcu Emeç is a theatremaker, performer and director playing at the intersections of visual and live arts. Deeply influenced by movement and image-based practices such as Viewpoints and shadow/object theatre she favours a sensorial and transdisciplinary approach to creation, investigating movement, text, image and sound horizontally to compose for the stage. Burcu’s work has been presented in Montreal, Toronto and Germany, and has received several accolades. As a performer Burcu will be appearing in Numbers Increase As We Count… February 2019 at MAI. She lives in Montreal and works also at the artist-run centre articule.

Isabel Mohn: Berlin born Isabel Mohn is a dancer and choreographer based in Montreal since 1995. The main focus in her work is the shifting correlation between the performers, the audience and the location. Her works have been shown in Montreal (amongst others at Tangente and with Danse-Cité), in Finland, Germany and Newfoundland.

Jacqueline van de Geer (Feeling in the blanks): settled in Montreal in August 2005. Her hometown is Rotterdam, a marked place, which was bombed twice during the Second World War. Growing up in a city that was still undergoing reconstruction has taught her a ‘do a lot with almost nothing’ approach in her practice. Intimacy and re-connection are the key words of her work: the purpose is to open the collective experience of the participants. Some inspirations of her work are daily life, Dada and personal memories.

Sarah Albu: experimental vocalist, sound artist and performance-maker. Her background in theatre and obsession with science fiction feed quirky and darkly comedic imagined worlds. An avid knitter, environmentalist and folk dancer, her recent work explores the effects of rapidly developing technology on our bodies and lives through a mix of curiosity and nostalgia.

*Studio 303 offers an annual residency for one emerging performance curator. The residency provides a framework for developing ideas through research, discussion and practice.