Artist Audrey-Anne Bouchard and her team are developing an immersive and inclusive performance form which does not solicit the viewer’s sight, but rather all their other senses. Their first creation Camille : un rendez-vous au-delà du visuel (MAY 2019) is accessible to people with visual disabilities and to the general public (who can experience the show blindfolded). Invited into the work’ setting, Camille‘s spectators are guided by a performer along a precise path that tells the story of a friendship’s sorrow: after Camille’s departure, Pierre copes with his friend’s absence. His memories and emotions are conveyed to the public through soundscape, set design and the choreographic language that involves contact between performers and spectators.

In the context of this residency, the team will revisit the work and explore what form an immersive performance can take for spectators with low vision in a context of social distancing. From Camille‘s material, the artists explore new processes and develop qualities of presence to create an immersive language where touch would give way to auditory possibilities of the performers’ bodies, olfactory installations or the spatialization of sounds.

BIO // Audrey-Anne Bouchard – Director and author
Audrey-Anne is an interdisciplinary artist, researcher and pedagogue. Since 2008, she has been working as a lighting designer in dance and theater. Her versatility and interest in the collective creation process has also led her to explore the process of stage direction. Inspired by her own visual disability, she initiated the Au-delà du visuel research project in 2016 to reflect on the possibility of creating and communicating dance and theater to an audience with low vision. In 2019, she directed and co-wrote the text for Camille: un rendez-vous au-delà du visuel, presented at MAI. With her team, she pursues her artistic approach beyond the visual and launches the creation of a second work entitled Fragments. She is engaged in the reflection on inclusive practices as a member of the expertise committee of the Chantier en Accessibilité Universelle de la ville de Montréal and of the advisory committee on universal accessibility of the Montreal Arts Council. 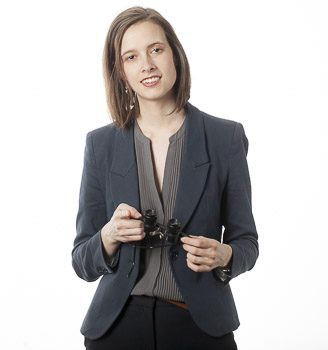